Raven is a top down 2D game, similar to a Quake-style deathmatch. It is originaly made by Mat Bucklandin his book, Programming Game AI By Example. This application has been completed for a school project at the Université du Québec à Chicoutimi (UQAC). The course is the following: Artificial Intelligence for Video Games (8IAR125). The gameplay of Raven is similar of a Quake-style deathmatch. When starting the game, severals bots spawned controlled by similar AI trying to win, by killing as many bots as possible. Bots can also pick up health or weapons if needed. The player could also take control of a bot by clicking on it. Ones the bot is controlled, some actions were possible like firing, switching weapons, etc.

When starting the game, several bots spawned controlled by similar AI trying to win, by killing as many bots as possible. Bots can also pick up health or weapons if needed. The player could also take control of a bot by clicking on it. Ones the bot is controlled, some actions were possible like firing, switching weapons, etc.

All the below techniques were already in the game or added by the team into Raven.

The final goal was to make bots behave like human as much as possible and create the illusion to playing against thinking humans.

In this application Mat Buckland decided to add a “brain” to each bots in the game. This brain used goal-driven behavior to tell the bot what he should do right now based on game entries.

This process works just like the human brain : if you want to achieve something, you will decomposed this goal into many sub-goals easier to solve than the first one. And if it’s not enough yet, keep doing this until sub-goals granularity are simple enough to be code by a function or a line of code. This can be done with the composite design pattern like the picture shows.

We can noticed that goals have three methods :

Those are used to start a goal, keep track of the progress, and close a goal. This kind of abstraction is really useful, specially when game data make the bot change his goal priorities (enemy showing up after passing a corner, enemy fire coming from the back, etc.)

Once we know how to achieve each goal, we need to choose between available goals. To do so, a score is given to each goal for each update. This score is calculated with Desirability functions that take many game parameters in account and standardized to be in the range 0 (Low Desirability) to 1 (High Desirability). The goal with the highest desirability is chose to be the next goal.

In addition, a memory has been add to be able to stop a current goal, make some actions and resume the previous main goal.

Fuzzy logic were also introduced to make bots choose their weapons based on the game context. Fuzzy logic is initially used to put values on vague linguistic terms like “small amount”, “slightly”, etc.

Thanks to Bayesian statistics and probabilities, we can defined a fuzzy set that describe the desirability of a weapon based on a specific parameter. By adding fuzzy rules to it, we will be able to compute the final value which will tell the bot, based on a final fuzzy set, which weapon is the best right now. 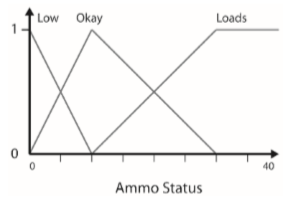 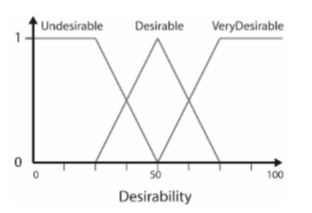 Finally, we implemented a neural network in this application to let a bot learned how to shoot. To do so, we used a multi-layer perceptron (MLP) and train it “to shoot or not” with specific inputs. Those inputs were the following :

We used the back-propagation to trained the network, which is a traditional supervised learning technique. To make sure the net was trained, we made tests with other data than our training data and we analysed results. We’ve find out that our learning process were doing good and we finally tested it in-game.

The final results were correct since the learning bot shoot at the other bots. We even noticed that his score were slightly higher than the average.

Site is Ready for Offline Use